Conflicting Reports: Baltimore Police Shoot A Protester In The Back, Tensions Rise 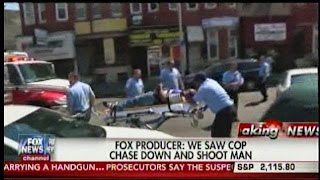 The video above shows the aftermath of what witnesses on the scene are reporting as an officer shooting a man in the back.

Baltimore police shot a man in the back before pepper spraying a crowd of witnesses, who began complaining that police were leaving the man to die.

The incident took place at 2:45 p.m., less than 30 minutes ago as of this writing, so details are sketchy, but a video recorded by PINAC correspondent Alex Salazar, who is on the scene, was uploaded to Facebook showing cops chasing people away as several people say they just shot a man in the back.

'via Blog this'
Posted by Alternativenewstome1 at 5:23 PM