This Is What Public Education Looks Like In A Police State 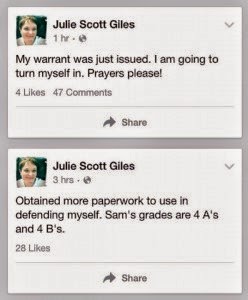 Mother and substitute teacher Julie Giles was arrested this week because her son had too many unexcused absences from public school.

Writ­ing on her Face­book page before turn­ing her­self in, Giles said “If any­one feels the need to go public with this feel free to do so….the facts are Sam orig­i­nally had what they consider 12 unex­cused absences, 6 are allowed per year, so he had 6 more than is accept­able, but the doc­tor reis­sued 3 excuses that Sam didn’t turn in, so basi­cally I am being arrested for three days.”

She also noted that her child has all A’s and B’s in school.

WTOC’s Don Logana contacted Screven County Schools Superintendent William Bland, who told him that the school district is working within the law.

“It’s important for these children to be in school and I think the courts recognize that,” he said.

Logana also learned during his investigation that several other parents have been convicted for the same offense at this school this year alone.

'via Blog this'
Posted by Alternativenewstome1 at 7:05 AM