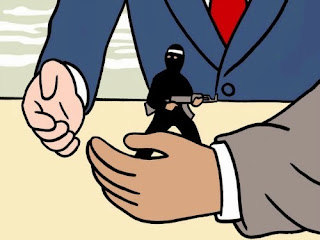 Jeb Bush got an unexpected verbal smackdown by a college student after a town hall meeting this morning.

When the meeting concluded, Ivy Ziedrich, a 19-year-old political science major at the University of Nevada, shouted out, “Governor Bush, would you take a student question?”

Ziedrich had questions for Bush, because during the meeting, he said that America’s retreat from the Middle East under President Obama had contributed to the growing power of the Islamic State.

The student told Bush that he was wrong, and proceeded to make the case that blame lay with the decision by the administration of his brother George W. Bush to disband the Iraqi Army.

'via Blog this'
Posted by Alternativenewstome1 at 5:22 AM