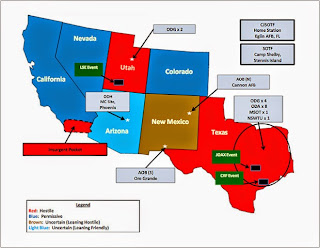 Jade Helm is active in over 40 states.

Jade Helm is spiraling out of control. By my reports, this unconstitutional and illegal activity has spread to over 40 states, not the seven states admitted to by Jade Helm personnel.  Military and troop movements are continuing as we are seeing armored vehicles on city streets in New Hampshire. Michigan is receiving ISIS terrorist threats and the Jade Helm contingent at Camp Grayling has pledged they will stop any ISIS attack.

Since the pre-Civil War days, the country has never seen days such as what we are witnessing today. The United States of America is being occupied by soon-to-be martial law, military forces.

'via Blog this'
Posted by Alternativenewstome1 at 9:27 AM